Crestline Sanitation District (CSD) is a Special District that collects and treats the wastewater in Crestline, CA. The District serves a population of approximately 10,000, with approximately 4,700 sewer connections and the remainder utilizing septic or holding tanks. 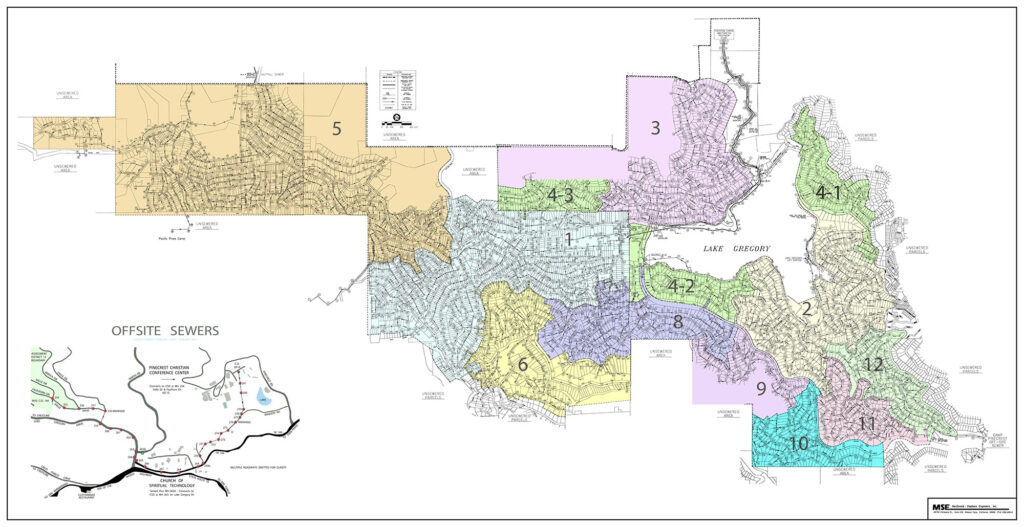 What is the history of the District?

Crestline Sanitation District (CSD) was formed on January 16, 1947 under Section 4700 of the State Health & Safety Code to provide sewer services to the Lake Gregory area of the San Bernardino Mountains. Cesspools and septic tanks were running into Lake Gregory. The State Board of Health at the time said one sign of an epidemic and they would step in and condemn the lake.

The Crestline Sanitation District was managed by San Bernardino County Special Districts. In November of 2008, Measure R was put on the ballot for voters to decide whether to stay with Special Districts or to move Crestline toward an independently run district.

Measure R, if favorable, also allowed for a 5-person Governance Commission to be created. Measure R was voted by the populous of Crestline with an approximate 83% return in favor.

The District presently has 5,336 equivalent dwelling units (EDUs), commercial and residential connections. The existing facilities have the potential to serve 6,500 connections.

Approximately one-third of the District area is sewered. The unsewered area is comprised of subdivided tracts, government land and large undeveloped parcels. In these areas subsurface disposal systems (septic tanks) are used for sewage treatment and disposal, as permitted under the original Sanitation agreement.

In recent years, the District has increased in area and facilities. Current District boundaries run east from Saw Pit Canyon to Twin Peaks and north from Rim of the World (Highway 18) to Mile high Park, approximately 23,000 acres. The District operates and maintains three treatment plants, 90 miles of collection system, a 14-mile effluent outfall line and an effluent disposal site on Las Flores Ranch in Summit Valley. Waste solids after processing become bio-solids which are then hauled by the District to a composting facility in Redlands.

Would you like a tour of one of our plants?